The Mayans believed mirrors opened portals to the Otherworld, and American’s don’t give a fuck what the Mayan’s believed. In ancient tall-tale, mirrors allowed souls and saints to leave their bodies and pass between two dimensions. Traditionally, a mirror would be settled in front of a saint’s statue to assist wondering O.G. Casper in recognizing his cute pale body when he was done ghosting chicks and be able to zap right back into it. 👻 In San Juan Chamula, an old Mayan Chiapas town, you can be sent to jail if you take a photo inside a church as almost all cameras require a mirror within the shutter, which can suck up a soul in an instant! Don’t be a dick, use a mirrorless camera instead! 😜

Look at all the selfies in your phone right now. How do you feel? Does a small part of you feel… that feeling? Why do you need so many when you can just look in a mirror? Seriously? What’s wrong with you? 😂

A photo of your face, it can remind you who you were, or what you are.

A photo can take you back to a memory that you NEVER would have recalled. The magic, there is no other word but magic for how your brain stores information that you didn’t even know is there.💫 That’s what dreams are made of, magic and unconscious information. I sleep in silence, so I can listen to my dreams. When you listen, you learn. That’s why you should write you dreams down. If you forget them, they go back into your unconscious. It’s nice to clear your slate.

I dare you to delete all your selfies. Don’t even look at one to save, just delete them and see how you feel. You probably will never think of them again and just take new ones! Seriously though, it’s good to delete them cause if you lost yo phone, someone might cut those selfies into a video and title it “Crazy Bitch”…. #viral

A photo, we used to print them and it would get expensive. If you bought the good stuff, you would have maybe 24 shots in a film roll. Then you’d develop them at a drug store and if you wanted to pay extra you could get the digitized them on a CD. Most people threw away the negatives, unless you were a grandpa.

A printed photo, a physical thing that holds an image of time and of your face. The paper, the ink, the processing, and the actual living moment that happened when the shutter dropped all required energy. There is so much energy in a single photo, especially in one you can hold. Sure a photo speaks a thousand words, but it inevitably makes you feel and experience something without a choice.

If you are part of The Last Gen, then you were the last to HAVE to get a photo developed to SEE IT. Imagine the physical photos out there of your face that you will never see. There are probably parts of your energy just stashed in someone’s closet. Imagine if you saw them and that unknown memory door opened. Would you want to remember that moment? Does it make you feel weird knowing forgotten memories of yours exist out there that your brain is not capable of remembering without a particular photo?

Think about how many photos of you are on someone’s phone. Do you really want that much of you out there owned by someone else?

It’s a control thing. We want to be viewed in the angle and light that makes us look like an Instagram star… and we’ve simply become self obsessed for people to know what we’re doing every moment and feel the need to interject a headshot. We’ve forgotten the magic behind mirrors and the true luxury of just being able to look at ourselves.

A few months ago, the most fascinating person I’ve ever met told me that in order to get what I want, I should start to vision quest. Part of this meant to look in the mirror and stare into my eyes for five minutes a day. Do you know what happens when you do this, when you honorably LOOK at yourself in the eyes? It’s somewhat more challenging to do so then to look at someone else straight in the eyes with moral. Your two eyes focus to the center of your forehead and become one… You look like a frog.🐸 Something else happens, something there are no words for. 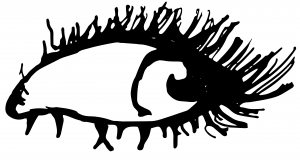 I never understood why I cringed and rejected being in photos until I looked into my eyes.

I believe eyes are the window toYOUR dimension and I often prefer to keep them closed.

I’ve been drawing my eyes since I was 8 and still re-draw them every day.

Yes, like everyone woman with a social media account, I have body dysmorphia and I think I look like a sumo rice puff in photos, especially ones other people take, but there’s always been something else that’s made me extremely uncomfortable. When you log into Facebook, every day you are given a new surprise and blast into the dimension of the past. They pull up a mirror of your soul from years ago. Did you want to be reminded of that time at this moment? You’re given no choice but to feel something and look back. Shouldn’t it be your choice if you want to go digging for a blast? It is your choice, it’s called intention. You can choose to be in a photo, you can choose to post a photo, and there is nothing wrong with pushing delete when you feel that moment is over, that is why the delete button is there.

Like controlling how you look in a selfie, we should start to think about how we control what information we give and put out on this planet👽. Energy out is energy in. What you do reverberates. What do you really want people to feel about you because when they look at a photo of you, it’s not just seeing, it’s feeling? What is your Instagram story post saying about you? A printed photo was much more of a controlled substance. Yes it could get in the wrong hands, but most likely that moment was anticipated and valued to a point that someone would want to go to the store and pay to print it. Our iPhone photos can spread like wildfire with no intention whatsoever.

Vedic Sanskrit says that we are born with three bodies. Your physical body, your soul, and your consciousness. When a celebrity’s nude selfie leaks, at least one body has been exposed to the entire world to put their energy and thoughts and intentions toward it. Thoughts become things.

Last night, I unintentionally spun down a rabbit hole I did not care to experience. 🐇I landed in the destination of a 12-year-old Photobucket account that was used for my Myspace💀! (R.I.P) I had no idea this account existed and the mirror of souls that poured out both haunted me and reminded I was always an extra-non-ordinary creature, but I quietly did not know what I was then.

How wonderful it would be to live in a world where there was a self destruct button for all photos and information of yourself on the internet? 💣 How is it we have developed nuclear bombs to destroy this entire planet, but not this simple button? (head scratch)

Photos speak and do much more than a 1000 words.

Your soul can be stolen, so keep that shit close and protect it; your life depends on it.

When the blast hit me last night, this piece of debris flung in the face. I made this image when I was 17. I was always me, hiding my face and interjecting into magical stories and other worlds. Know who you are. 👁

Please Note: I’m a hypocrite at the top of her game.

How many times did your soul get sucked today?

Burning Bridges – Not Everyone Falls Down

Tears of LaCroix – Aquire Some Taste in 100 Days.