Imagine when the clock struck midnight, Cinderella turned around to take a selfie of herself and her shoe on the red grand castle carpet before she had to return her rented dress instead of running? Her prince never would have searched for her, because mystery is everything. There would have been no fairytale to imagine, her Instagram photo would have ruined the moment. Hopefully all the likes she got from her ‘sisters’ were worth it.

Imagine experiencing the beautiful and wanting to share that moment with those who might appreciate. You take a photo and let it out into the digital region of dimensions beyond the clouds and that’s it; beautifully shared with a purpose. Imagine never feeling that uncontrollable urge to look at your phone to see who may have liked it or viewed it because you’re satisfied with what you shared. You already liked it, and that’s all that mattered. Imagine.

What if you woke up tomorrow and every like on every photo you’ve ever posted disappeared? You panic, what the hell is going on? You open up your Snapchat to see if anyone has viewed your most recent mundane adventure made 15 second epic and you can’t see who viewed your shining moment. Gasp! Heart beating, face pulsing. You check some super famous ‘influencer’s’ account and you’re relieved, all her likes are gone too!

At least it’s not just you, God forbid.

We can all pretend that we don’t care about likes, but somehow we check our phones constantly after posting something to see who liked it. We re-watch the videos we just posted of ourselves again and again because well, who better to watch then yourself? We even watch other peoples’ stories, a.k.a. reality shows because we want them to watch us back. Most people probably know who their frequent followers are that tune in each episode and wonder why they skipped one.

Even though you barely know your followers, it feels good to know they’re watching you. The thing is, no one really truly likes something they spent less than a few seconds viewing. No one really cares what you’re doing (but maybe your parents) and if they do, that’s weird and they probably have a lot of self-love to develop.

Imagine if we loved ourselves so much, that sharing was an act of giving back rather than taking. Think about it, we take our likes by the number.

We have rehabs for addiction to substance and sex. Have likes become a substance? Apparently likes produce off oxytocin in the brain, the same hormone that turns sane girls psycho after being ghosted. If we have this sacred duty as a community to help people, then maybe the most powerful companies in the world should start to really think about the future of digital substance abuse. Did Facebook (or shall I say Myspace, long live Tom.. I once matched with him on Bumble, which is fruity) set out to create a new substance to be abused? No. Social media is a powerful tool to connect people and bring the world to you, but the internet has become the most dangerous destination you can travel to. As Le Corbusier famously designed, “Less is more.”

How does it make you feel every time you’ve stared at Instagram longer than 5 minutes and watched all these stories of people you barely know. Do it make you feel smarter? Prettier? Inspired? Maybe… Probably not. The internet needs to be treated as a travel destination. We travel somewhere because it makes us feel good. We want to taste the food, experience the culture, feel the vibes, and smell the air. The internet takes you places. It’s time and important to be cautious about the destinations you travel to.

Where have you last traveled?

There’s the very ‘in the now’ broken record question, “How did social media, a groundbreaking platform that was invented to help us communicate, cripple communication?” Millennials may be branded ‘gold’ for companies, but millennials are lacking what The Last Gen and before were born with- the real human response. iPhones are a third party and we forget there are humans on the other end, therefore we treat people and moments and our values as disposable.

That beautiful moment you had, did you violate it?

Did you forget to just feel it? It’s okay if you did, we’re human, but think about next time. How lucky are you to get to experience it again? How many people really care that you might get a second chance? Really, how many likes do you think you’ll get? (I’d get 16 likes, 3 by people I really know.)

If we knew less about our ‘friends’ and what other people were doing, would we be better people? Would enjoy moments differently?

If Cinderella posted her every moment and of cute mice caring around her food and then eating it after… We’d have nothing to fantasize about.

Make your life it’s own fairytale. Be a legend. Imagine if people imagined about you?

We’re addicted to likes and it’s the core to millennial self-obsession. The future used to be America’s youth, but the future really does lie in lessons learned from The Last Gen and in the past. Remember remember.

Think about it. What if you could post your moments and no one could like them, would you still post? Would you spend less time on your phone? Would spend less like looking at other people?

We check our likes so much that we even do it on the toilet. Don’t pretend your phone isn’t in your hand every time you’re taking a shit. Boom!

I’m a deleter. If you’re paying attention, then it is no secret, but why are you paying attention? I think I post intimate moments that I’d rather just keep for me out of a little loneliness, but mainly insecurity. Unconsciously, I post so people can see what I’m doing, so I can tell them a story about why I’m great, but why would I have to show people this? If they knew me and spent real time with me, then there’s no need for them to watch my reality show. With every post not pertaining to art, I feel like I violated that special light inside of me. Not everyone should be allowed to see it, it’s special (at least to me). And there’s nothing awesome about someone who has to pull out their phone in the middle of trying to fully experience the real world. I’m slowly learning, not all things done can be undone, like impulsive text messages to ghosts and a long 21-page letter to that one-person-that-one-time. Maybe forgiven, but I’ll never forget. I always say it takes two weeks for me not to feel embarrassed about something stupid I’ve done… Like my most recent stint of going to Mexico without a passport just because, posting every minute, and making other questionable decisions along the way. But hallelujah, because I’m no one, my posts can be deleted and most likely never recovered. There’s this unspoken taboo regarding people who delete, but why T.F. would there be a delete button if otherwise? We change everyday and I personally think

I have bi-polar social media disorder.

Yesterday I decided to delete all my Facebook photos except for my profile photo. I wanted a blank slate and quite frankly, when I look at old photos I think, “that’s no longer me.” Everything holds energy. I accidentally deleted my latest Facebook profile photo with a whole 20 something likes and a comment and I actually panicked, “SHIT.” I googled, “How to undo deleting a Facebook photo.” You can’t. Then I thought, shit, what are people going to think if I repost it? Then I was like what the fuck is wrong with me? I don’t even know anyone on my facebook! Like seriously, I really know like three people. 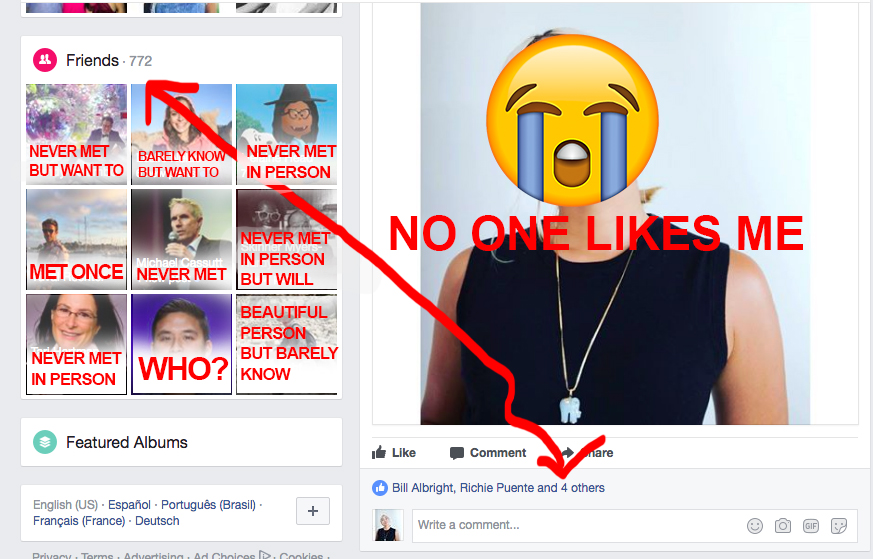 Who do you know? Who do you really like, in a verb sense?