An hour past sundown on December 22, 2017, an 80-year-woman in stilettos, a blonde wig, and a very tight cat-eye facelift runs into an endangered Barnes & Noble store in Marina Del Rey, California yelling of magnificence for everyone to look at the sky.✨

“Did you see it? Did you look?” she nods with complete confidence in what she had seen. Eyes wide and alert, she gains composure and speaks, “Aliens are here. They’ve finally come. Crazy shit.” She embodied the spirit of this dude below. The paper book shoppers thought, was it the facelift that made her look crazy or was she crazy? It never once crossed their minds that it could be true, that magic was real.

“I need to see a copy of the deed bible” she asked the Barnes & Noble dude. No one knew what she was talking about and they just looked at her with shame as if she were just a crazy lady off the streets. Indeed, she probably was a crazy lady, but even the crazy have eyes.👁 Within the hour, instagram and twitter explode. She saw it and they didn’t. 👽

Are we all going to ignore the fact that an ORB was in the sky that could be seen clear as day from Los Angeles to Cabo San Lucas and only god knows where else?

After an instant hashtag freak out, there was a sigh of relief, “Oh it was just a SpaceX rocket launch, almost had me thinking it was Independence Day.”

BITCH IT WAS INDEPENDENCE DAY!

Have you ever seen a rocket launch look like that before? NO! Google it now. Not one video like it. This past sunday, January 9th, SpaceX’s first 2018 launch was filmed, even though it was for a claimed “secret government satellite” called Zuma. Extra terrestrially, Zuma spiraled over Sudan’s sky like a UFO and now it’s “gone missing.” Disappeared into thin air, literally. SpaceX has no comment on the missing satellite that is now claimed to be in the ocean. BULLSHIT. BULLSHIT. BULLSHIT. 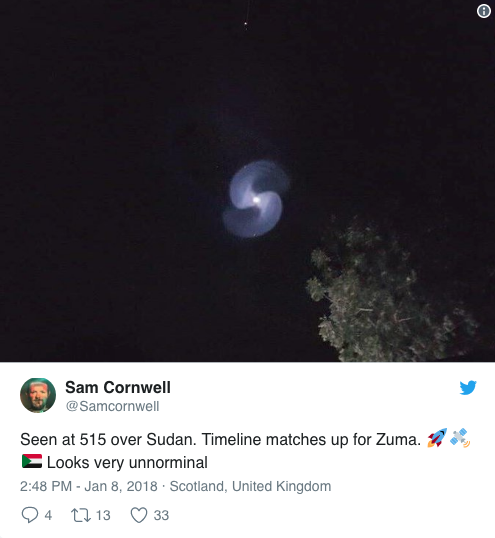 You’re telling us, a SpaceX secret government mission satellite fell in the ocean and there is no GPS to locate it? BULLSHIT! They are letting E.Ts to home home! #freeET

In boring talk, it’s a rocket, part of SpaceX’s rocket re-use program, that transports satellites and a spacecraft called Dragon into pinpointed space orbits. Dragon needs to enter the same orbit as ISS, the International Space Station, to transport humans and cargo. Once the Falcon 9 reaches orbit, it releases whatever it’s carrying (cough cough aliens), comes back down to planet earth, and lands somewhere unseen in the Atlantic Ocean. The Falcon 9 has been launched in 2010, 2013, 2016, AND 18 times in 2017. SpaceX plans for 30 launches in 2018 surpassing China and Russia in the space race.

Why wasn’t the Falcon 9 launch on December 23, 2017 filmed to debunk the public? It’s because

Lord Elon knows we’re all dumb now and will believe anything a “news” station tells us.

Why was there no public warning of the spectacle? People freaked out, Chris Brown went ape-shit on instagram, and with all the traffic in L.A., some selfie hoe out there for sure has an insurance claim. Does Gieco cover CRASHED MY CAR CAUSE I SAW AN ALIEN? 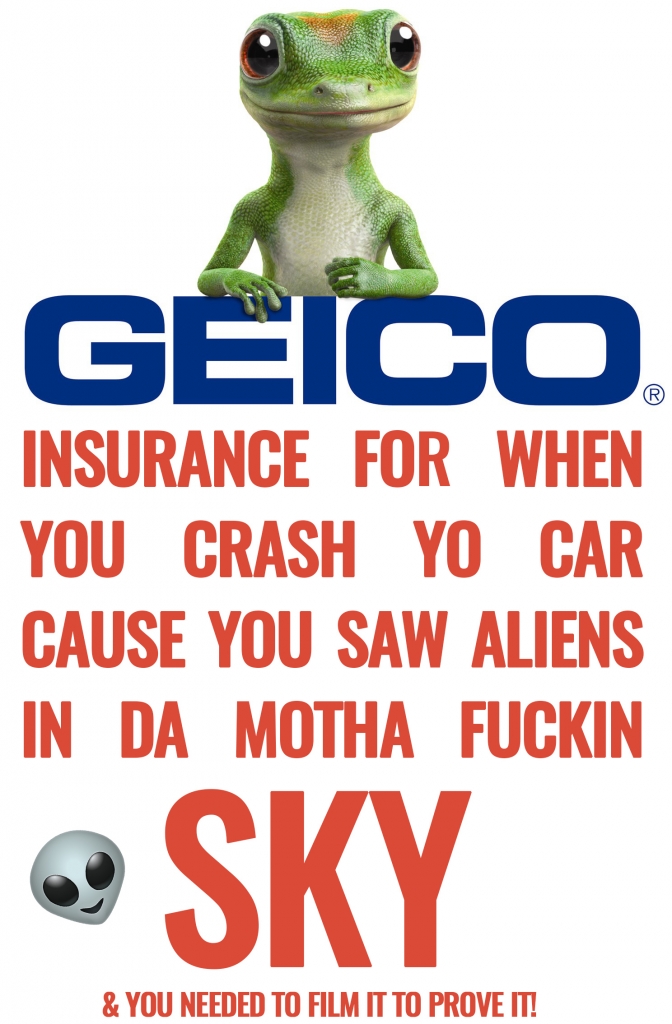 Some people even thought Kim Jong Ew nuked us. The truth is, SpaceX did indeed launch the Falcon 9 that day from the Vandenberg Air Force Base in Santa Barbara, California, BUT they got a little help with from the ALIENS.

Take a look at Lord Elon and SpaceX’s instagrams. They have no photo’s of taking ownership of the orb in the sky. Why wouldn’t they post a photo, it was a beautiful unreal site to be seen, a work of art really? Oh it’s because they can’t take credit for it! They were no the painters! IT WAS ALIENS.👽 Hell it would be more likely a black Santa, then a simple rocket launch.🎅🏿 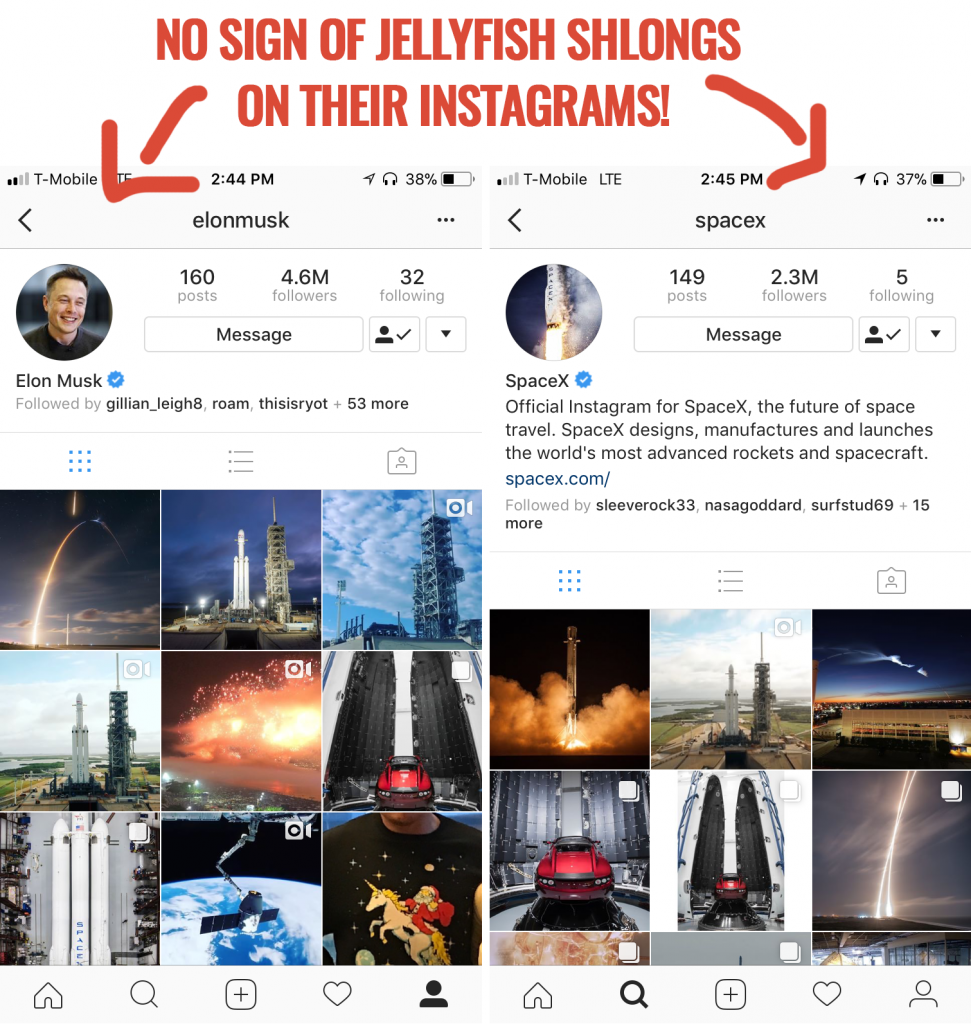 LOOK AT THE CLUE’S PEOPLE! Lord Elon left US clues. Look at his instagram. On October 9, 2017 he posted a photo saying

“The LAST of ten Iridium global communication satellites delivered to orbit several hundred miles above Earth, traveling at over 17,000 mph. They will circle the planet every 90 minutes.”

Even his 69-year-old Covergirl mom @mayemusk congratulated him with emojis. Now why would SpaceX claim two months later when the sky turned into a jellyfish that they launched the 10 satellites for the Iridium constellation? LIARS. They didn’t even know the sky was going to grow a shlong! 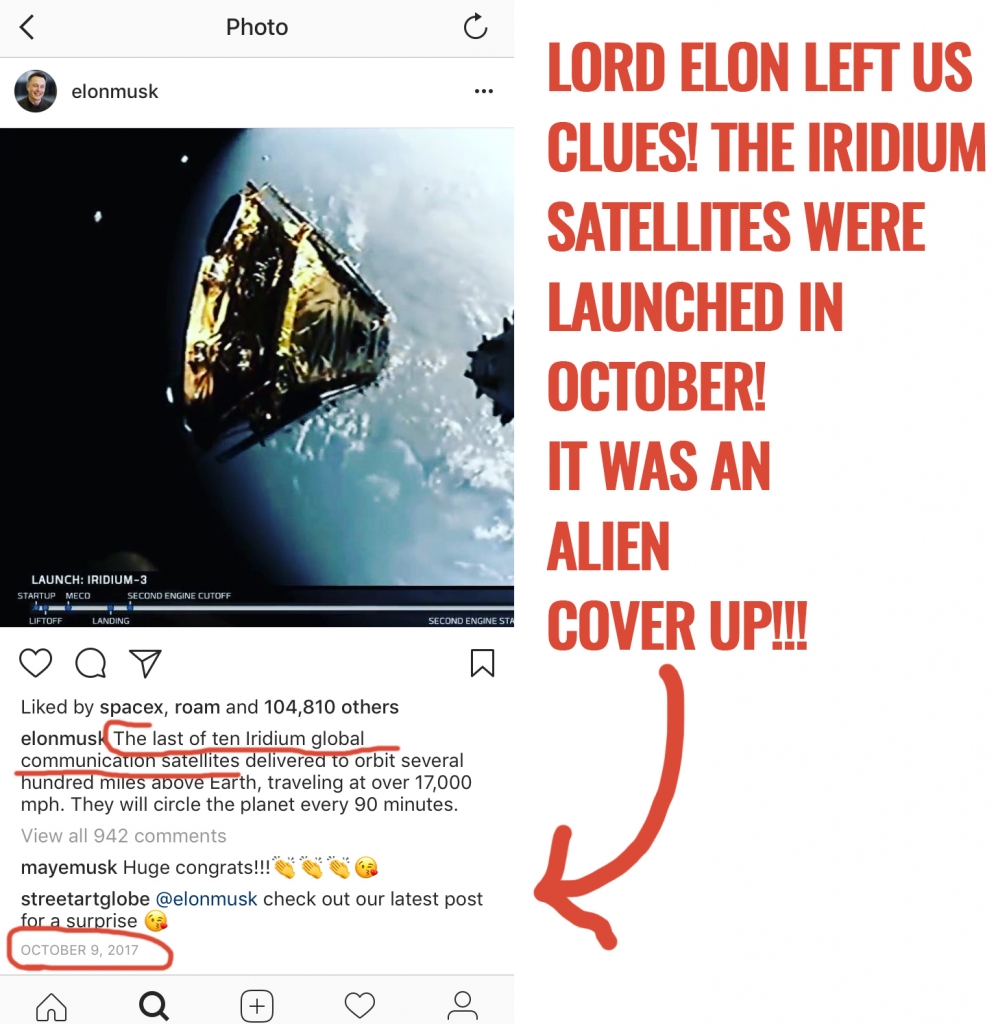 Here’s TLG simple ALIEN + SPACEX TELEPORTATION SPERM THEORY of how the Falcon 9 really launched. SpaceX needed some help getting shit into the sky, so they made a deal with the government and aliens that the aliens could go home if they helped teleport some shit to the sky. It’s pretty simple and it makes more sense then launching satellites that were already launched. Look people, there were TWO FLYING ELEMENTS IN THE SKY AND THE FIRST ONE LIT THE WAY USING GRAVITATIONAL TELEPORTING MAGIC TO LIFT WHATEVER IT WAS CARRYING. Yeah now I bet you’re thinking I was the crazy hoe in da Barnes & Noble. 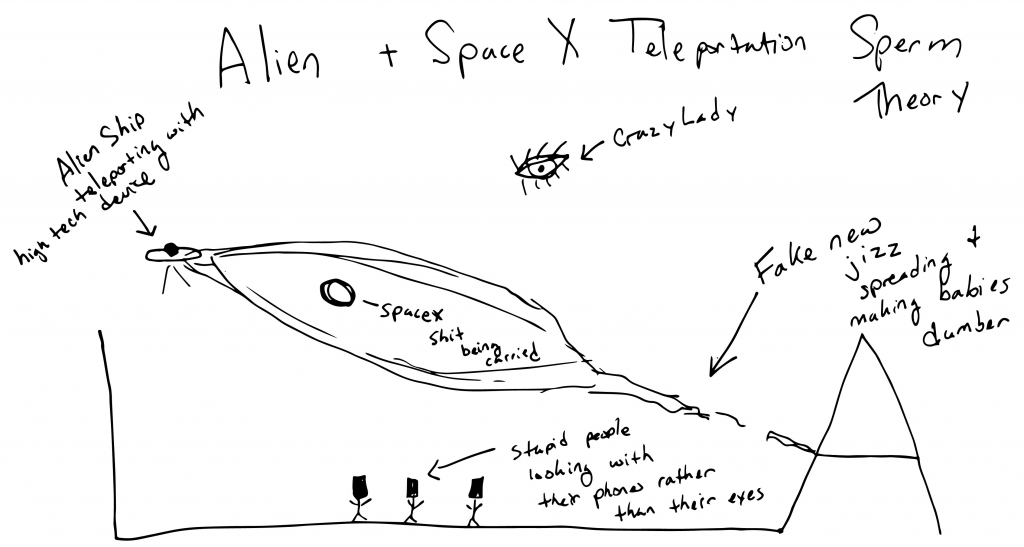 Have we become so robotically programed to FAKE NEWS that even after we SAW IT WITH OUR OWN EYES and there are PHOTOS and VIDEOS showing us it was real, that we’ll let fake news tell us magic is not real?

Do we believe in anything anymore?

Do we no longer believe in ourselves? We saw it, it was there. With no real comment from SpaceX, but rather social media and news outlets telling us it was “just” a satellite, we stopped asking questions. No satellite launch has ever looked like that. Even if it wasn’t a UFO, that was magic. A gravitational orb circulated an object, which it appeared to be teleporting. It appeared to move like a jellyfish shlong, like a living organism and or an advanced form of technology. With the subject matter of light-speed alone, aside from an atomic bomb, we’ve never been able to produce something that could be seen from such a wide distance, ever.

The thing is, magic is real and it was indeed a UFO. How fucking cool. It’s not scary, it’s time! NOW, the question is, what was its purpose and what is the real story? You saw it, it was real, THAT’S A REAL STORY, don’t let fake news tell you it wasn’t. If you can’t believe something you saw with your own eyes, then you are blind and don’t deserve to have eyes.

He doesn’t deny it.

Moral of the Story

Seeing is believing and believing is seeing. It’s time to start believing again. With social media and stupid people, history books and facts will render pointless if we believe anything fake news tells us. Whether it was aliens or if it was just a rocket, start asking questions and trusting your intuition as opposed to everyone else’s. Here at TLG, we know what we saw.

In July 2017, a man I knew and wrote about named John Nordlinger died. His death was very significant to me and before he died he gave me his life’s work to get published as a real book. It’s a Christmas Poem called, Xmas Files, about how Aliens came down to earth for Christmas. Because magic is real, I believe it was no coincidence that Aliens visited us for Christmas and I hope the ghost of John was up there riding along. 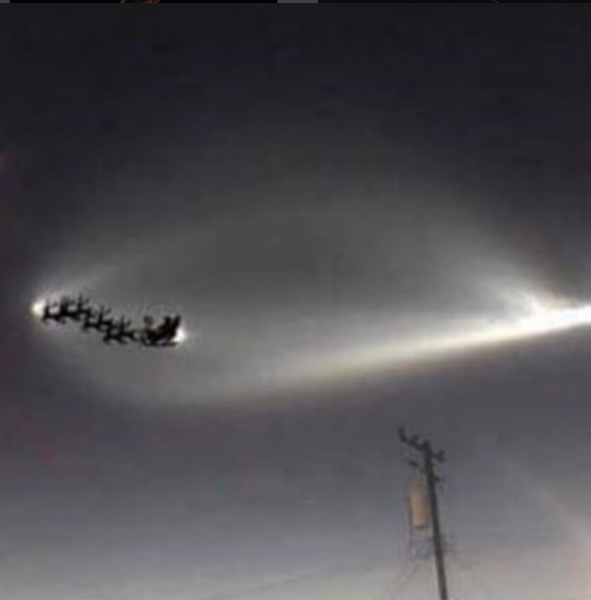 I believe nothing is impossible, magic is real, and value my eye site. Use your eyes, not your fingers.

Ho Ho Ho! There are 3 Types of Christmas Ho’s! Which are you?

Protected: The Last Gen: A Poem

“I can’t wait to turn 30!” said no one ever. There’s this van culture thing happening.